Let no one say when he is tempted, “I am tempted by God”; for God cannot be tempted by evil, nor does He Himself tempt anyone. But each one is tempted when he is drawn away by his own desires and enticed. James 1:13-14 NKJV

Blessed is the man who perseveres under trial because when he has stood the test, he will receive the crown of life that God has promised to those who love Him.

At once the Spirit drove Jesus into the wilderness, and He was there for forty days, being tempted by Satan. He was with the wild animals, and the angels ministered to Him.

Genesis 22:1
Sometime later God tested Abraham and said to him, “Abraham!” “Here I am,” he answered.

Matthew 4:7
Jesus replied, “It is also written: ‘Do not put the Lord your God to the test.'”

No temptation has seized you except what is common to man. And God is faithful; He will not let you be tempted beyond what you can bear. But when you are tempted, He will also provide an escape, so that you can stand up under it.

Matthew 6:13
And lead us not into temptation, but deliver us from the evil one.’

Afterward, you should come together again so that Satan won’t be able to tempt you because of your lack of self-control.

Test me, O LORD, and try me; examine my heart and mind.

Remember that these forty years the LORD your God led you all the way in the wilderness so that He might humble you and test you in order to know what was in your heart, whether or not you would keep His commandments.

5 Examine yourselves to see whether you are in the faith; test yourselves. Can’t you see for yourselves that Jesus Christ is in you—unless you actually fail the test? 6 And I hope you will realize that we have not failed the test. 7 Now we pray to God that you will not do anything wrong—not that we will appear to have stood the test, but that you will do what is right, even if we appear to have failed.

I am tempted of God; for God is holy, and without iniquity, nor does he delight in sin, but hates and abhors it; nor can he commit it, it being contrary to his nature, and the perfections of it; whereas no one can tempt another to sin, unless he is sinful himself, and delights in sin, and in those that commit it, nor without committing it himself; and yet sinful men are apt to charge God with their sins, and temptations to them, in imitation of their first parent, Adam, when fallen, Genesis 3:12 who, to excuse himself, lays the blame upon the woman, and ultimately upon God, who gave her to him; and suggests, that if it had not been for the woman, he should not have ate of the forbidden fruit, nor should he have had any temptation to it, had not God given him the woman to be with him, and therefore it was his fault; and in this sad manner do his sons and daughters reason, who, when, through affliction, they murmur against God, distrust his providence, or forsake his ways, say, if he had not laid his hand upon them, or suffered such afflictions to befall them, they had not been guilty of such sin: he himself is the occasion of them; but let no man talk at this wicked rate,

for God cannot be tempted with evil; or “evils”, He was tempted by the Israelites at Massah and Meribah, from which those places had their names, who by their murmuring, distrust and unbelief, proved and tried his patience and his power; and so he may be, and has been tempted by others in a like way; he may be tempted by evil men, and with evil things, but he cannot be tempted “to evil”, as the Ethiopic version renders it; he is proof against all such temptations: he cannot be tempted by anything in himself, who is pure and holy, or by any creature or thing without him, to do any sinful action:

neither tempteth he any man; that is, to sin; he tempted Abraham, to try his faith, love, and obedience to him; he tempted the Israelites in the wilderness, to try them and humble them, and prove what was in their hearts; and he tempted Job, and tried his faith and patience; and so he tempts and tries all his righteous ones, by afflictions, more or less: but he never tempts or solicits them to sin; temptations to sin come from another quarter, as follows.

Jamieson-Fausset-Brown Bible Commentary
13. when … tempted—tried by solicitation to evil. Heretofore the “temptation” meant was that of probation by afflictions. Let no one fancy that God lays upon him an inevitable necessity of sinning. God does not send trials on you in order to make you worse, but to make you better (Jas 1:16, 17). Therefore do not sink under the pressure of evils (1Co 10:13).

of God—by agency proceeding from God. The Greek is not “tempted by,” but, “from,” implying indirect agency.

cannot be tempted with evil, etc.—”Neither do any of our sins tempt God to entice us to worse things, nor does He tempt any of His own accord” (literally, “of Himself”; compare the antithesis, Jas 1:18, “Of His own will He begat us” to holiness, so far is He from tempting us of His own will) [Bengel]. God is said in Ge 22:1 to have “tempted Abraham”; but there the tempting meant is that of trying or proving, not that of seducement. Alford translates according to the ordinary sense of the Greek, “God is unversed in evil.” But as this gives a less likely sense, English Version probably gives the true sense; for ecclesiastical Greek often uses words in new senses, as the exigencies of the new truths to be taught required.

Matthew Henry Commentary
1:12-18 It is not every man who suffers, that is blessed; but he who with patience and constancy goes through all difficulties in the way of duty. Afflictions cannot make us miserable, if it be not our own fault. The tried Christian shall be a crowned one. The crown of life is promised to all who have the love of God reigning in their hearts. Every soul that truly loves God, shall have its trials in this world fully recompensed in that world above, where love is made perfect. The commands of God, and the dealings of his providence, try men’s hearts, and show the dispositions which prevail in them. But nothing sinful in the heart or conduct can be ascribed to God. He is not the author of the dross, though his fiery trial exposes it. Those who lay the blame of sin, either upon their constitution, or upon their condition in the world, or pretend they cannot keep from sinning, wrong God as if he were the author of sin. Afflictions, as sent by God, are designed to draw out our graces, but not our corruptions. The origin of evil and temptation is in our own hearts. Stop the beginnings of sin, or all the evils that follow must be wholly charged upon us. God has no pleasure in the death of men, as he has no hand in their sin; but both sin and misery are owing to themselves.

It should be abundantly clear to every Christian that God is a God of love and does not receive any pleasure, nor is He capable of sin, thus its lure and temptation. When His one and only begotten Son was hanging on the cross, God the father looked away from the sin Jesus bore because it was not congruent with His essence.

Yes, sin does exist. Satan uses it to his fullest capabilities. God tells us He does not endorse this but He must permit it or it would not exist. I can not agree wholeheartedly with Mr Henry in that God did not create sin. At least not indirectly. I realize this is bordering blaspheming God which i would never ever desire to do but that fact is that it exists. In Genesis, we read that God created everything. Everything is everything.

I am fully persuaded that to reach the pinnacle of love, there must be a choice; a free will. Thus, this must be where sin and its ugly cohorts entered as the antithesis of love and all that is good. Look at the way this life operates. It’s the friction of positive and negative, the proton and neutron, day and night, etc that drive and energize everything as we know in this world.

God in His awesome omniscience must have known this. Nothing can catch Him off guard. He is privy to all knowledge. We get a look at this in His interactions with Job and Satan. We know there is no sin in God thus the temporary distance between us exits. Thankfully, He didn’t leave us in our fallen state and send the 2nd perfect Adam in Jesus.

Therefore, God is not tempted but He does test because we have a free will.

Lord almighty, some things are too great for me to fully comprehend yet there are plenty of things you reveal.

Help me to focus on what I do know, seek your Word and revelation for new to me and not to get lost in the quagmire of the mirk.

You are good and that is good enough for me. 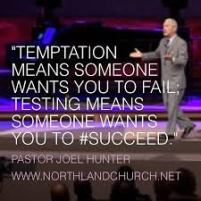